++Thought for the Day: Fulfilled is the heart bereft of doubt.++

This question has been debated for most of the two and a half decades that Warhammer 40K has existed. Perhaps not so much in the old days of Rogue Trader, but certainly ever since the codification of what it meant to be a Space Marine in 2nd Edition. And you will never get a consensus since people have their own preferences. There are a lot of fans who are quite happy with the idea of them as nine or ten foot behemoths, and there is certainly nothing wrong with that. So, how tall are Space Marines? This blog will assume that this classic image of Jes Goodwin sets the precedent for a Space Marine that is approximately seven to seven and a half feet tall.

Why does the scale start with one foot being at ground level? The world will probably never know. Or somebody knows and I’ve just never seen it explained. Either way, the Space Marine’s head tops out at the seven foot mark, and if he was standing straight up, you figure he would end up about six inches taller, give or take.

And that seems fairly reasonable. After all, at a certain point, there would be diminishing returns the larger that they bioengineered Space Marines to be. The taller they get, the harder time they could potentially have negotiating doorways and passageways designed for regular humans (or Eldar or Tau or Orks, etc). The taller they get, the heavier they get too, which also means testing the load bearing integrity of structures designed for relgular humans (or Eldar or Tau or Orks, etc). British basketball player Neil Fingleton was about seven and a half feet tall, and he weighed 370 pounds. Shaquille O’Neal was 325 pounds at “just” 7’1. And neither of these guys have the extra internal organs, nor expanded and densified musculoskeletal system that the Space Marine has. At just seven and a half feet tall, you could surmise a Space Marine might reasonably weigh close to 450-500 pounds, without his armor. All of these things become irrelevant if you apply The Rule of Cool with a fairly liberal and generous set of parameters. But these things occur to me, and will be reflected in my vision of the 40K Universe.

One fortunate thing is, human beings come in a variety of sizes, so I don’t worry too much about the height of the human models next to the Space Marines. Only that they end up taller than the tallest human figures in the 28mm heroic scale. Yes, in real life there are human beings who are seven foot and taller, but they’re a pretty small minority. I want the Space Marine model to evoke the idea of a transhuman (or post-human) giant, but something that is still somewhat human. And I don’t think they have to be enormous to achieve that. I’m six foot tall and about 190, but someone who is seven feet tall is huge next to me. If you stack around 250 more pounds on them of muscle and attitude, that would be downright scary.

One other problem that the Space Marine models face is proportions. 28mm heroic has never been known for its accurate proportions, but Space Marines suffer immensely from this. Coming right off the sprue, they have big long gorilla arms and their heads are too big. Tall Scale, or True Scale helps alleviate some of this. I don’t modify the arms of my figures for exactly this reason. While lengthening out the legs and torso helps bring the Space Marine model into alignment with basic human proportions as demonstrated against Leonardo Da Vinci’s Vitruvian Man sketch.

It will never be perfect, obviously. I’m a guy with some plastic card and a dream, not a professional sculptor creating the model from scratch. Plus, hopefully this project inspires people. I’ve always been a huge fan of people sharing the models that they’ve made after reading my log and seeing my models. And I’d like to keep this project accessible to everyone. If I can make these, so can you. 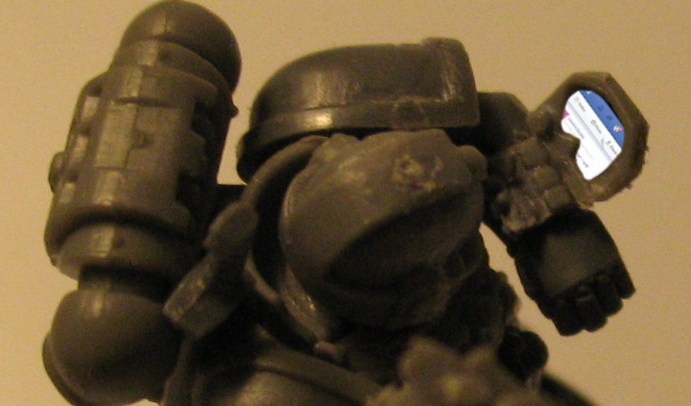 One thought on “How Tall is a Space Marine?”