And we’re back to the Imperium. I’ve always loved the idea and fluff behind the Ogryns, but not always the models. But I really liked the new Bullgryn/Ogryn kit. Especially the gasmask heads, which meant I could have Steel Legion Ogryns (!) to match my company’s worth of metal Steel Legion infantry.

Yeah, I know that the Ogryns can’t wear carapace armor if they take ripper guns. Whatever.

This kit is a bitch, lol. The Ogryns come in three poses, with letter coded parts, A, B and C. The kits only fit (properly) when using the same combination of letters across the kit. In some cases (what foot goes where), this isn’t a big deal. But it does mean, in the end, you’re basically stuck with three specific poses with ripper guns, or six poses for the Bullgryns. Which is somewhat misleading since your choice is right arms with power mauls or right arms with grenade gauntlets, and left arms with big ass shields, and left arms with little shields. So look at the picture on the outside of the box. Because that’s exactly what yours are going to look like.

If you put them together as intended. 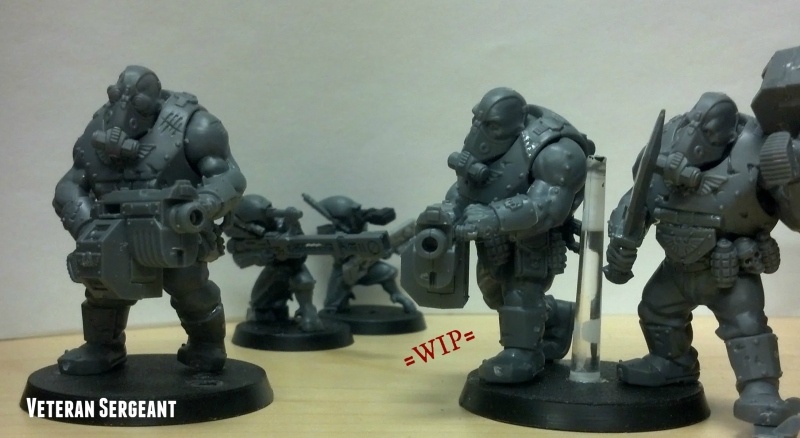 First I cut off the hanging tank treads from the chest plate. I had planned on doing this from the start, but it became a moot point, since the ripper guns couldn’t fit around them anyway and it became necessary. Then I fiddled with the arms (I actually ended up mixing and matching A & C) to get two Ogryns with weapons leveled at an unfortunate enemy.  The last guy was something of a compromise. There’s one left arm that really has no choice but to be pointed up. I didn’t like any of the poses that left me with. I gave the ogryn a big knife from the Ork Boyz kit, but that left the ripper gun just always looking awkward in the model’s right hand, no matter what I did. So I cut the ripper gun free of the right hand, and put it in the left. The allowed me to have the ogryn resting the weapon on his shoulder, and to have the big knife in his right hand. It’s certainly my least favorite of the three, but it works. The other option is to perhaps use one of the Bullgryn right arms with the power maul (cutting the maul off). I dunno, I’ll play with it.

As you can see, these guys are tall, and they scale up well next to my True Scale Space Marines.

Amusingly enough, I realized I didn’t have any spare bases for them, so the Bone ‘Ead got his own and the other two Ogryns borrowed an old broken flight base from a Tau Crisis suit until I get some new ones.

Either way, Ogryns with gasmasks. Heck yeah. Honestly, if I felt I could get more poses out of these guys, I’d buy more just for scenery. There’s just something cool about Ogryns, the big dumb lovable bastards.

Next on the Workbench: Squats!